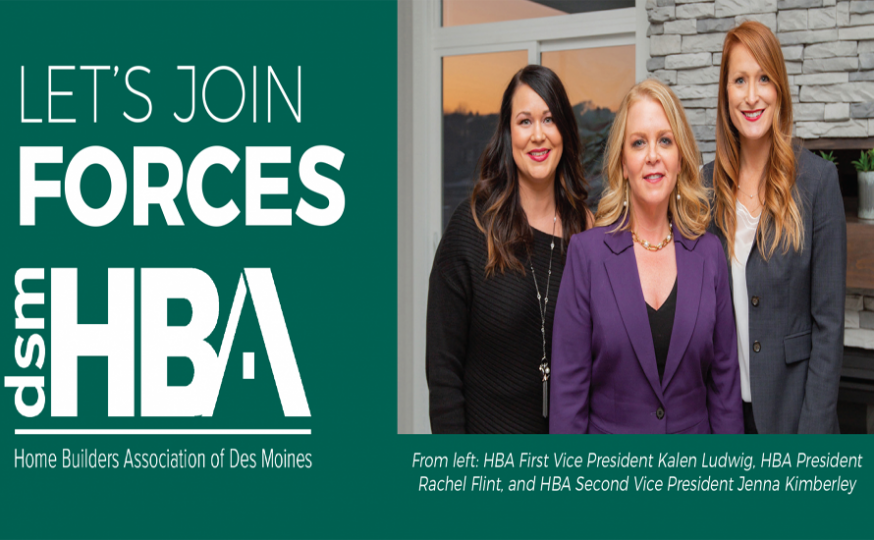 Recently, Jenna Kimberley was elected Second Vice President at the local Home Builder Association Des Moines Chapter. She, and her fellow committee members, were featured in BUILD Magazine in their December Issue. They highlighted the first-ever all-female Executive Board for Iowa HBA. Tracy Dickinson tells that story.

Nationally, female builder membership in the HBA remains about 5%. In Iowa, that number is even lower. But you wouldn’t guess that to look at the list of 2020 HBA Executive Committee Members. For the first time, not just in Iowa but in the country, a local HBA chapter will be led by an all-female Executive Board. President Rachel Flint, Vice President of Hubbell Homes; First Vice President Kalen Ludwig, Director of Sales and Marketing for Groundbreaker Homes; and Second Vice President Jenna Kimberley, Vice President at Kimberley Development, sat down with BUILD recently to discuss the milestone. They were joined by HBA of Greater Des Moines Executive Officer Dan Knoup and board secretary Amy Kimberley of Ferguson Bath Kitchen & Lighting Gallery. “I know it’s a first for an all-female HBA board,” Flint says. “So I guess it’s a big deal, but I don’t want to be known as the first or best ‘woman’ anything. I just want to be the best at what I do.” Jenna Kimberley agrees. “I got involved with the HBA when I came back to Iowa because it was a way to give back and to get involved in what was happening in the industry locally. I was the last to join the leadership team here, and being nominated and elected is such an honor and opportunity to show young women what this industry has to offer.” Among the team’s primary objectives for the year ahead are to encourage involvement from all members and to show women that the home construction industry offers a wealth of opportunities for them.

“We all took different paths to get here, and there are even more opportunities available now.” – Jenna Kimberley

Knoup, in fact, sees women as key to bridging the skilled trades gap. “Any field for which people used to say, ‘Women shouldn’t do that’—those are the careers that are wide open for women.” “With only 5% of builders and contractors being women nationally, it’s no surprise that it’s taken this long for there to be an all-female board,” says Ludwig. “But we’ve had strong leaders to follow, and hopefully young women will see that with our leadership, too.” Iowa has not had a reputation as one of the most progressive states in the country, so the fact that Iowa is the first to elect an all-female board indicates what women have been up against around the U.S. Flint, Jenna Kimberley, and Ludwig all say that their success is in part the result of those who were willing to go against the norm. “We have to give credit to the men who educated, mentored, and believed in our ability to do the work we do,” Flint says. “Bill Kimberley, Rick Tollakson, and Steve Bruere were each forward-thinking enough to put a woman in a position that was really unheard of in this industry.”

“Even though most of them were from a generation of men who didn’t put women in charge, Bill has always hired women and worked with strong women,” Kimberley says.

To support these women and their efforts in paving the future of home building in Iowa, become a member today. The Des Moines Home Builder Association provides a ton of benefits that you can find here.

Everyone we dealt with through the whole process was very helpful

Our experience with Kimberley was very professional and personal at the same time. Everyone we dealt with through the whole process was very helpful. Dave, our superintendent, was great at keeping us informed during construction of our home. We really appreciated everyone involved–it made the process easy!